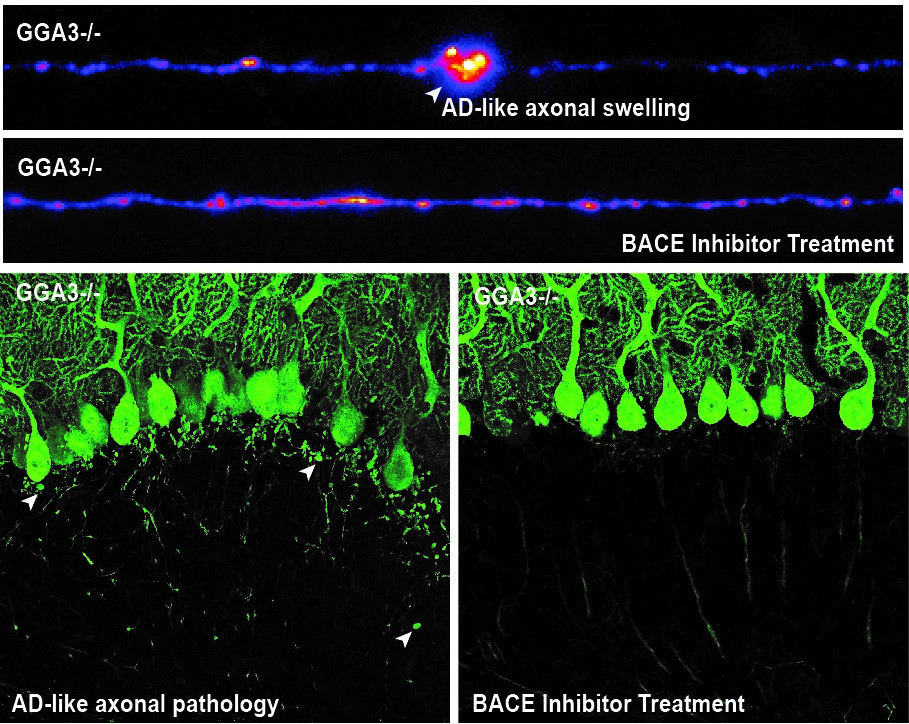 Pharmacological inhibition of BACE prevents the formation of Alzheimer’s disease-like axonal pathology in cultured neurons (top) and in the mouse brain (lower panels).

The ongoing search for effective treatments for Alzheimer’s disease has focused on aggregates of amyloid-β peptides, which are the hallmark of the disease. However, efforts to inhibit one of the proteins responsible for producing amyloid-β, called BACE1, have led to several failed Phase 3 clinical trials.

But researchers aren’t giving up hope. A study published in Science Translational Medicine on November 18 reveals how variants in a gene called GGA3—which are a known risk factor for developing Alzheimer’s—alter BACE1 movement through brain cells in culture and in mice. This causes the buildup of BACE1 protein and creates axonal damage similar to that seen in the pre-symptomatic stages of Alzheimer’s disease. This could mean BACE1 inhibitors still have promise as a treatment if used much earlier in the disease process.

“I think the core message from this paper is that this could be one additional primary pathogenic development that precedes amyloid plaques buildup,” says Henrik Zetterberg, a neuroscientist at the University of Gothenburg in Sweden who was not involved in the research. “What causes amyloid buildup? What are the primary pathogenic processes? That is pretty much unknown. We have the risk genes, of course, but this paper gives another very interesting piece of the puzzle of what might cause neurodysfunction in Alzheimer’s disease and could also cause amyloid buildup.”

Genetic studies have found that rare mutations in GGA3 increase the risk of Alzheimer’s disease. In previous research, the authors of the current study identified the role of the GGA3 protein in transporting BACE1 in non-neuronal cell lines. BACE1 is a protease responsible for cleaving the protein APP to produce the amyloid-β peptides that accumulate into plaques in Alzheimer’s. This new paper is the first demonstration of the consequences of GGA3 dysfunction on BACE1 in cultured neurons and mice.

“One of the big gaps that we have is taking the genetics, the biochemistry, the pathology, and putting it into a cell biological context. I think there’s a really critical need to understand where in the cell all of this biochemistry takes place,” says Shawn Ferguson, a cell biologist from Yale University who was not involved in the research. “That’s where this paper is interesting, because it’s focusing on where these proteins may encounter one another, what may regulate the movement of these proteins in the axon, and how all of this could influence the proteolytic processing of APP.”

The researchers found that deletion of the GGA3 gene or mutations found in people reduce the trafficking of BACE1 through the axons. BACE1 then builds up in the axons, causing them to swell. This swelling could explain the damage seen in patients’ brains.

“This axonal pathology can be detected in the human brain in the early stage of Alzheimer’s disease,” says lead author Giuseppina Tesco, a neuroscientist at Tufts University.

“If a patient doesn’t have the GGA3 mutation, it’s still possible that defects in axonal pathology are caused by other genes. It is still valuable to know that once you have axonal pathology early, BACE accumulation could be a factor. So these mechanisms can apply more generally.”

Phase 3 clinical trials of several drugs aiming to block the activity of BACE1 were abandoned, because they often caused side effects that made memory and thinking worse for people with Alzheimer’s disease. It is thought that side effects from BACE1 inhibition result from stopping its other functions in the brain.

In this new study, the researchers found that inhibiting the activity of BACE1 prevented the swelling seen in neurons without any functional GGA3 protein. Tesco suggests that using a lower dose of BACE1 inhibitors at an early stage of Alzheimer’s could be an effective approach for slowing the progression of the disease.

“The clinical trials that have been conducted, they had a pharmacological inhibition of BACE activity, up to ninety percent in some cases. So I think that what we learned is that probably we need to inhibit BACE to a lesser extent,” says Tesco.

The earliest damage to the neurons happens up to 20 years before the appearance of the clinical symptoms of Alzheimer’s disease, according to Tesco, so any treatment to prevent this would need to be given over a long period.

There is some evidence for the benefits of longer, weaker inhibition of BACE1 from studies of a genetic mutation found in the Icelandic population. The mutation reduces the ability of BACE1 to produce amyloid-β by about 20 percent and lowers the risk of developing Alzheimer’s disease.

“It looks like a small reduction over a very long time seems to be good enough,” Tesco says.